Gear for the Small Boat for Long Cruises

Like many sailors, we’re outdoor enthusiasts who enjoy activities that allow us to be outside often. So we’re always interested in crossover gear that we can use on the boat, in the woods, or even in our day-to-day lives. A few products reached our desks recently that fit this bill: the Nemo Helio portable shower and Good To-Go dehydrated meals. While both have obvious appeal for campers and backpackers, they’re also useful for small-boat sailors, and the dehydrated meals are ideal for those venturing offshore, Chesapeake Bay, or packing emergency kits. 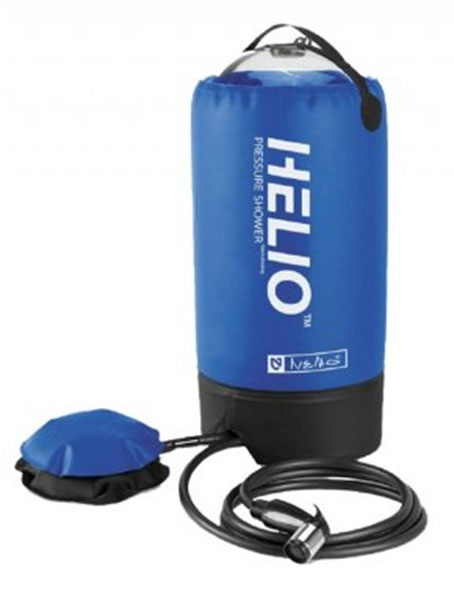 Based in New Hampshire, NEMO Equipment markets a portable, non-electric, pressurized shower system that we’ve already found a dozen onboard uses for. The Helio
shower kit ($100) comes in a small, zippered storage bag (6 inches tall by 9 inches wide) with drain holes. The 1 pound, 9 ounce system comprises a bag-style water tank made of rugged, PU-coated polyester material, a pressurizing foot pump, and 7 feet of hose with a kitchen-style spray nozzle at the end.

Testers found setting up and using the Helio to be fast and easy. Unlike gravity-fed solar showers, the Helio is designed to be left on the ground (or cockpit sole, deck, or dock) during use. To set it up, you fill the 2.9-gallon water tank (similar to a dry bag) via a top-mounted port; filling is mess-free and easy when using a faucet or hose, but if you are pouring in warmed water from a pot, use a small funnel. (Unlike most solar showers, warm water will not damage the Helio.) Once the tank is filled, use the attached foot pump to pressurize the water bag; 10 or so pumps was sufficient. Then, you’re in business. The sprayer offers a generous shower with very good water pressure—but don’t expect shoreside-shower luxury; it’s still a portable shower.

Nemo claims the kit provides five to seven minutes of steady water pressure per pressurization. This is true if the sprayer is held close to the bag (waist level), but pressure was not sustained that long without additional pumps when we held the hose overhead. This is not a big deal, especially for those accustomed to solar showers or taking “Navy” showers.

The versatile Helio had enough umph to wash testers’ hair (including long hair) and dirty dishes, as well as rinse sticky beach sand off feet, saltwater off dive gear and PFDs, and mud off shoes.

Bottom line: If you need a way to freshwater-rinse feet, gear, decks, or to shower, ditch the gravity shower and invest in a Helio. Seriously. In our opinion, the only benefit of a gravity-fed solar shower over the Helio is its price. We also prefer the compact Helio to the pressurized, rigid-tank, $129 Big Kahuna shower (see PS, April 2009) we’ve tested.

Made in Maine, Good To-Go Meals is the brainchild of co-founders and backpackers David Koorits and Jennifer Scism, the company head chef who also was a 2004 winner of the TV Food Network’s Iron Chef competition.

We were initially skeptical when we set out to taste test the company’s “gourmet” meals: Thai curry, herbed mushroom risotto, smoked three bean chili, and classic marinara with penne meals. We’d tried a handful of different brands of freeze-dried meals over the years and had yet to find one that we actually enjoyed. While some were decent and served their purpose well (filling bellies easily and quickly in foul weather), they weren’t what we’d call “yummy.”

We were pleasantly surprised that the dehydrated meals’ ingredients were all recognizable, real food and included zero preservatives—yet the packets have a three-year shelf life. The offerings are all gluten-free and either vegetarian, vegan, or pescatarian (containing fish). This was impressive given the usual challenge of finding freeze-dried options sans meat or dairy.

All that’s needed to prepare the meals is 1 to 2 cups of boiling water and 20 minutes of waiting time. The boiling part is important. The microwaved water we added to the risotto was apparently not hot enough, and the result was still-firm risotto. For the other meals, we used a JetBoil (see PS, November 2010 online) to heat the water, and the meals turned out perfectly.

Despite the crunchy risotto, the meal was enjoyable, and the others were downright tasty—especially given that these are backpacking food. All of the meals came in twoserving packets, which is enough to serve as a meal for one or side dishes for two, in our opinion.

Bottom line: The Good To-Go meals ($11.50) are very easy to prepare (just add boiling water and wait); store nearly flat in non-rusting, paper-foil packets; include only natural ingredients; and most importantly, they are satiating and tasty.

A very suggestions from the fleet to make your trips easier.

1). Get a good Ice Chest that is well insulated and large enough to store your refrigerated supplies but small enough to work around and store in your vessel.

2). Freeze gallon jugs of water not completely filled with water. Use them in your coller and boats ice instead of bags of ice cubes from the local store. As the ice in the jugs melt use it for drinking or cooking.

3). If you are purchasing ice purchase it in block form since that lasts longer then the cubes.

4). Invest in a Bimini cover and frame that can be used to shelter you when your sailing or just at anchor or docked from the sun. Plus it can be folded out of the way when not needed.