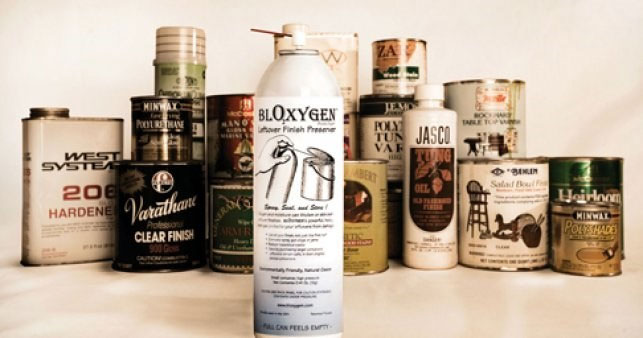 Bloxygen displaces air in the container with inert argon gas.

One of the counterintuitive fall rituals is to renew your varnish and finishes before putting your boat into storage. After all, who is going to admire your work while the boat is under wraps or in the boatyard? Varnish and sealers keep out moisture that can eventually damage the finish, creating more maintenance in the future. Moisture intrusion doesn’t stop just because your boat isn’t out sailing.

Perhaps the best reason to touch up or add another coat of varnish in the fall is to avoid having to do it in the spring, when you are anxious to get back in the water and have so many other critical tasks to carry out. But once your varnish work is done, and you are now left with several cans of very expensive marine varnishes, and other marine coatings—some opened, some untouched—that you don’t want to go bad. What to do?

Stored in a dry place at room temperature, an unopened container of most of the varnishes and wood finishes will last anywhere from three to five years. However, some unlined metal cans will corrode surprisingly fast, so protecting the can with a corrosion preventative may help extend the product’s life. Keep in mind that even though a product appears a slightly different color after some time in the can, it may be fine once applied. It’s good to apply it to a test patch before throwing out a batch. Once a container is opened, a multi-year shelf life is not guaranteed, but here are things to preserve the product for another season:

In addition to the above tips, a few readers have recommended pumping half empty cans of varnish with a product called Bloxygen. Bloxygen contains pure argon, a naturally-occurring gas used for welding and in packaging bagged foods like potato chips. The gas displaces oxygen in the container container, helping to preserve the contents. A .40-ounce can is available at various internet retailers for about $10. When ours came in the mail, it was so light, we were certain we’d been sold an empty can of “Florida sunshine.” However, according to the maker, each can is good for 75 quarts. Pumping the stuff into the coating’s can requires no fancy handwork, but make sure the can’s rim and lid are clean and still seal tightly. When you spray, avoid spraying directly into the varnish or paint because this can cause it to splash out.

Does it work? In 2008, we counted several cans of marine varnish left over from our test of wood coatings. As is our policy, we ended up donating most of those to local charity (the Sarasota Youth Sailing Program is one of our current partners), but we kept a few for follow-up testing. This year, almost four years later, I opened up a halfempty can of Epiphanes Rapid Clear that we’d sealed with Bloxygen, and I couldn’t tell the difference from the original in the way it looked, smelled, or applied.

The same, however, couldn’t be said of all the varnishes we protected. The two-parts seemed the most vulnerable, but this may have been due to some negligence on our part. Of the eight cans we sealed, five showed no sign of deterioration.

Bottom line: Based on our experience, Bloxygen is worth using for those who have multiple cans of expensive coatings to protect, but success isn’t assured with all products, particularly two-part wood finishes.