Just north of the Key Bridge, on the north side of the Patapsco River, sits the massive Dundalk Marine Terminal. One of the busiest ship handling facilities in the Port of Baltimore, the Dundalk Marine Terminal sits on 570 acres of reclaimed land, basically harbor dredge spoil from Colgate Creek, which runs along one side of the terminal. This accounts for the regular shape of the terminal complex.

Dundalk now handles shipping containers, Ro-Ro (roll-on / roll-off) traffic, and breakbulk cargo. Breakbulk means non-containerized general cargo. The terminal is the largest facility for automobile imports in the mid-Atlantic, and one of the largest exporters of tractors and other rolling farm equipment. Other cargoes, such as coal, sugar, oil, etc., are handled elsewhere in Baltimore’s port. By specializing in only a few types of cargo handling, the port has made each terminal facility much more efficient, allowing ships to spend less time in port and more time on the high seas.

The saga of Dundalk Marine Terminal actually started way back in 1920, when the small Logan Field airport was opened across the street from the present terminal site. Logan Field was a primitive facility, but served as Baltimore’s aviation gateway to the area. Famous aviators who flew in and out of Logan Field included Charles Lindbergh, Amelia Earhart, and Douglas (Wrong Way) Corrigan. 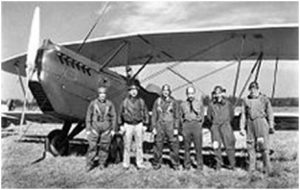 Logan Field, however, was a poor choice for an airfield, constrained as it was by its small size and constricting road network. Shortly after the end of World War II, Logan Field was shut down. However, across Dundalk Avenue, dredged material from Colgate Creek gradually formed the artificial peninsula that was christened Baltimore Municipal Airport. Opened in 1929, Baltimore Municipal principally handled flying boats (seaplanes) from carriers such as British Overseas Aircraft Corporation (BOAC – the precursor to today’s British Airways), and Imperial Airways (Imperial merged into BOAC in 1939.) Pan American Airways also flew flying boats into Baltimore Municipal. Later on, regular runways were laid out on top of the compacted dredge material, and airlines began using the site as their terminal in the Baltimore area.

The field was taken over by US Army operations during World War II, under the name of Baltimore Army Airfield, but transferred back to Baltimore Municipal Airport after hostilities ended. In 1957, the Maryland Air National Guard operating out of that airport relocated to Glenn L. Martin Company Airport, now Martin State Airport, due to the longer runways available there.

As with Logan Field before it, the lack of available land meant the slow death of Baltimore Municipal Airport, which had been renamed Harbor Field in 1950. At the same time, the opening of Friendship Airport (now BWI) southwest of Baltimore spelled the end of commercial airline traffic at Harbor Field. The longer runways there could, and still do, handle aircraft of any size. Harbor Field because an airport for corporate planes and private aviation.

The entire airport was purchased by the Maryland Port Authority in 1958, and was converted into the present Dundalk Marine Terminal. With shipping berths on 3 sides of the complex, Dundalk can handle up to 13 ships, making it one of the most versatile shipping terminals anywhere. The site is close to I-95 and I-695 via Broening Highway, and is served by rail spurs as well. For many years, Dundalk Marine Terminal also served as Baltimore’s cruise ship port. That function has now moved to a dedicated facility in Locust Point near Ft. McHenry.

Unfortunately, the beautiful art deco-style Pan Am terminal and control tower buildings have been demolished. The visible evidence of aviation activity at both Logan Field and Baltimore Municipal Airport / Harbor Field has vanished. 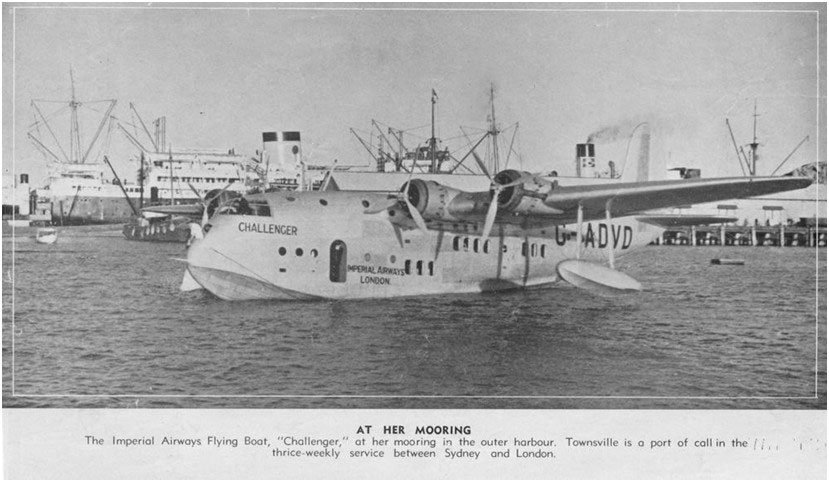 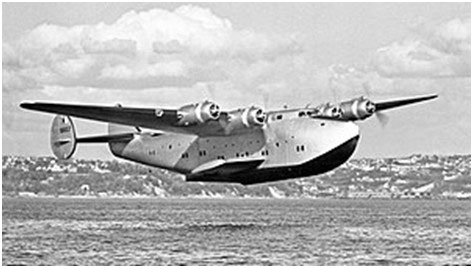 The Boeing 314 Clipper seaplane flew a regular route for BOAC non-stop from Baltimore Municipal Airport to Bermuda. Cruising speed was between 155 and 180 miles per hour, which would have made for a non-stop flight of 5½ to 6 hours to cover the 820 mile distance.