There is an children’s book written in 1908 called Wind In The Willows.  It has a famous boat quote as follows; “Believe me, my young friend, there is nothing, absolutely nothing-half so much worth doing as simply messing about in boats.”  LROS Cruise proved this was true, there is nothing better than spending time on boats with friends, but more about that book later.

SUNDAY DAY 1 – The cruise was planned to start as a springboard from the weekend’s Fall Foliage Cruise, but with high winds and threat of rain the highly anticipated event was cancelled.  Therefore the Sunday start, originally planned as cruise from Worton to the Magothy, was shifted as a start by 3 boats from Worton and the balance from their home ports with a new, better protected destination at Rock Hall; some on mooring ball, some anchored and SCADGER at a marina.  The passage had winds from the north in the low to mid-teens, with large rolling waves.  It made for a fast downwind sailing with everyone arriving at the protected waters of Swan Creek in early afternoon. 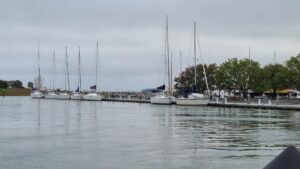 All lined up. (From left to right) Journey, Tidechaser, Adventure, Vahine’, The Great Esc, Knot Yet and Scadger tied up at Knapp’s Narrows.

MONDAY DAY 2 – With everyone back together as a group our 7-boats, ADVENTURE, ENDEAVOUR, THE GREAT ESC, JOURNEY, KNOT YET, TIDECHASER and SCADGER continued south under the Bay Bridge. With continuing high winds from the North in the teens, it was more big rolling waves and wonderful downwind sailing.  We made the 30+ NM passage easily by mid-afternoon, arriving at Knapp’s Narrows Marina & Inn with descending winds and easy docking on their floating channel-side dock.  VAHINE’, our new Canadian friends, Miche’l and Karolyne Gagne, had been anchored on the Magothy for the last two days in high winds waiting to hookup with us.  They quickly integrated into the group and joined several of us for dinner at Characters Restaurant near the draw bridge.  Good food and lots of great conversation.

TUESDAY DAY 3 – The plan for Tuesday, with all eight boats gathered, was a short 13 NM passage to our prime destination, Oxford, MD.  To add a little excitement, we scheduled the FIRST ANNUAL NC3 LAST RIGHTS OF SUMMER INTERNATIONAL HANDICAPPED SAILING REGATTA, or simply the NC3 LROS CHALLENGE.  The race started from the last green marker at the end of the Knapp’s Narrows channel, continued to the Red-10 marker at the south end of the Choptank River and then East to the Light at the mouth of the Tred Avon.  All participants kept their own times and self-reported to the cruise leader at the finish.  We all had a great time and Chris and Luci on Tide Chaser winning the event with a handicapped time of 2 hrs. and 9 min. This over the 10-mile course in very challenging conditions.  An excellent time and a finish with the top four boats finishing within 10 minutes of the first.  Great thanks to JOURNEY who waited to start with me and ensure no problems on my first opportunity to call for a bridge opening, all went well.  Again, thanks to Dave and Deb.

The actual trophy with the following engraving, 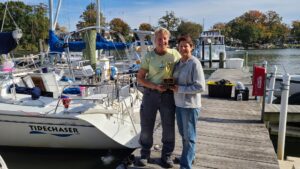 will be presented at the Change of Watch meeting on November 6th . Tide Chaser will hold the trophy until next year’s event when the trophy will again be up for grabs. It’s darn near the America’s Cup, just a little less history.

Once in Oxford, at the wonderful Safe Harbor Marina, we all gathered for happy hour and Dave Wisel took the moment to welcome our friends from Canada, talk about their exciting six month cruise to Florida, and how we had made them the first Honorary International Members of NC3.  Then Bruce from ADVENTURE presented them with an NC3 Burgee that we all signed. Karolyne was so overcome it brought a tear to my eye.  It was certainly the high point of the week. Hats off to Dave & Bruce for this excellent presentation.

WEDNESDAY DAY 4 – This was our rest day, and with the heavy winds early in the week and all the excitement of the race I was ready for a break.  We started the walking tour of Oxford at 1:30 led by Leo Dunmyer, the 84-year-old past president of the Oxford Museum and a lifelong resident of the town.  Leo lived up to his reputation and the 1 1/2-hour tour, covering 7/10 mile, which Leo led mostly walking backward and using his portable speaker with rock star style headset, flew by.  He was the greatest, and who knew Tred Avon is pronounced Tredavon??  We finished the evening with cocktails and dinner at Latitude 38, and the initial announcement of the race winner, even though we only had a photocopy of the trophy to present.  A good time with great food and friends.

THURSDAY DAY 5 – Eight boats pulled out of Oxford with 7 of us heading NNW for the Rhode River and VAHINE turning SW for the Solomons and on to Florida.  The wind was light 4-6 to start with the fleet splitting, AVENTURE, ENDEAVOUR and TIDE CHASER motoring up the north route back through the Knapp’s Narrows, while JOURNEY, KNOT YET, and SCADGER sailed down wind, sometimes wing-on-wing, eventually turning across the wind making one long 15-mile tack. Being as stubborn as they come, THE GREAT ESC sailed across the Choptank, motored through Knapp’s, then hoisted sails on the west side of Knapp’s and continued sailing. But eventually the wind slowed, and we all finished the trip under power.  The Rhode was a tremendous place to anchor with ADVENTURE, ENDEVOUR, THE GREAT ESCAPE and TIDE CHASER anchoring at the first anchorage where the Rhode curves north.  JOURNEY, KNOT YET and SCADGER went further around the second curve in the Rhode and anchored behind High Island which is not so high anymore and is actually under one foot of water.  Except for a last-minute warning from KNOT YET, I would have discovered this the hard way.  We rafted up with JOURNEY in the center and had a wonderful evening.  This was the first time I had to use the dinghy to take Kiko to shore, it was easy rowing and gave some great shots of the three boats together.  Kiko the dog never barked once making Kim and I look bad after all of our concerns.  The group at the first curve also reported a very delightful evening with little movement.

FRIDAY DAY 5 – Unfortunately the high winds that started the week were predicted for Saturday with even higher gusts but this time from the south.  Because of this the entire fleet decided to end the week with one long passage north back to our home ports, approximately

Sunrise over the Rhode River on the last morning of the Last Rites of Summer Cruise – 2021.

35 NM.  The winds started out soft but continued to build and by the time I rounded the northeast corner of Hart Miller I raised my sails to winds in the 8 to 10 range, shut off the engine, and sailed all the way to the mouth of Frog Mortar, hitting 5.5 or more.  It was a perfect ending to a wonderful week.

Now back to that book from the beginning.  Although that first quote is the one you always hear, as a Cruiser, there is one much better later in the book, and it goes like this; “For the days pass, and never return, and the South still waits for you.  Take the Adventure, heed the call, now ere the irrevocable moment passes.”  One thing I have learned from this cruise is do not miss any opportunity to cruise with good friends. Take the Adventure, when the 2022 schedule comes out I will be looking to sign up for some new adventures, you should do the same!